FORENSIC ANTHROPOLOGIST GIDEON OLIVER GOES TO EGYPT, BUT THIS TIME IT'S NOT ONLY BONES....IT'S MUMMIES TOO!

....And the Critics Weigh in on Them

"The Elkins show why they are perennial favorites....Just the ticket for fans of Margaret Truman or classic Mary Stewart." Library journal

"Witty, intelligent, and delightful. . . . Aaron Elkins is notable among mystery writers in that he can take a heap of nasty old human bones and turn them into suspense and humor” The Washington Times​

"The thrills are indeed heady . . . Mr. Elkins and his insouciant hero have their witty fun with the corps d'elite of the international art establishment while providing some pretty amazing information on the ...forgeries and...art scams that give the experts nightmares." The New York Times Book Review

"These are the kind of novels that give genre fiction a good name."  Booklist

The Alix London Series, by Charlotte and Aaron Elkins--With good reason, she's called the Art Whisperer, but her unique and dangerous talent is as likely to get her in big trouble as it is to help her solve art crimes.

The Gideon Oliver Series, by Aaron Elkins--
Aaron's Skeleton Detective is the father of the forensic genre, having first appeared in 1982 at the age of 37. Now, over thirty years later, he's still finding skeletons in closets. (And he's only 41. How does he do it? Literary magic!)

The Chris Norgren Series, by Aaron Elkins-You'd think a museum curator of Renaissance and Baroque Art would lead a quiet, even dull, danger-free life...but you'd be dead wrong.​

The Lee Ofsted Series, by Charlotte and Aaron Elkins--Young golf pro Lee Ofsted doesn't often find herself in big trouble during tournaments. But off the course....it can be murder.

The Standalone thrillers, (Loot, Turncoat, and The Worst Thing), by Aaron Elkins. Chases through the capitals of Europe, looted art, festering grievances, and the devils within us--with three different, unique protagonists.

Between them, this multiple-award-winning writing team has four well-received mystery series (and four standalone thrillers), all going strong.

As his fortieth birthday dawns, Metropolitan Museum of Art curator Val Caruso is not a happy camper. His promotion has been scotched, his divorce is now final, and he fears he’s gotten himself mired in a  middle-aged rut.

But opportunity intervenes--an assignment in Milan to help elderly Holocaust survivor Sol Bezzecca recover a pair of cherished sketches by Renoir. The paintings had originally been given to Sol’s great-grandfather, a tailor, by the then-penniless artist in exchange for a new winter suit of clothes. Seventy-some years later they were looted from the old man’s kitchen by the Nazi-organized Italian Fascist militia, and now after decades in hiding they have turned up for auction. It’s up to Val to get them back.
Unfortunately, the effort entraps him in a sinister web that reaches all the way back to World War II—and is still sticky with art thieves, forgers, and somebody who desperately wants Val out of the picture Permanently.
The costs of reuniting a good old man with his rightful past? A concussion, a hospital stay, and a stitched-up face that makes him look like Frankenstein’s monster, to name a few. The reward? Priceless.

To find individual books, please use the "Books" tab at the top of the page 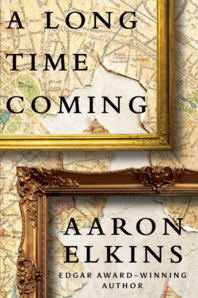